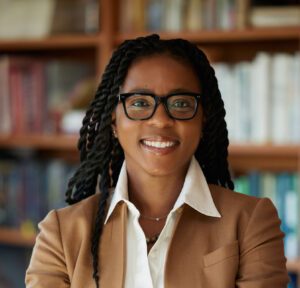 Toya Fick is the president and CEO of the Meyer Memorial Trust. In this role, she is responsible for executing on the foundation’s mission to accelerate racial, social, and economic justice throughout Oregon.

After earning her BA in political science from the University of Chicago, Fick became an educator and taught middle school in Louisiana and Washington, DC. In 2005, Fick began to use her teaching experience to advise former Senator Hillary Rodham Clinton on education policy. She then became an advocate for equitable outcomes in education on behalf of the Alliance for Excellence in Education, the Oregon Health and Science University, and Stand for Children.

Fick has spent much of her career working to create more equitable schools for all children in Oregon. While serving as the Oregon Executive Director of Stand for Children, she was one of the primary authors for Ballot Measure 98. To date, Measure 97 has provided over $750 million to support career-connected learning opportunities in high schools throughout Oregon. Since its implementation, the graduation rate for students in Oregon has significantly increased. She played a critical role in passing the Student Success Act, the Student Success Act, and numerous other bills in the Oregon Legislature. Fick currently serves on the board of the University of Oregon’s board of trustees and Foundations for a Better Oregon. She’s currently the president of IWF Oregon and recently served as the membership chair.

Fick considers her most important role of her life is being the mother of two incredible young children. 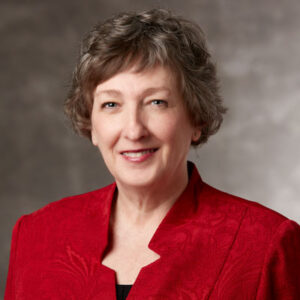 Jan Robertson is the Chief Operating Officer and a principal of Norris, Beggs & Simpson Companies, LLC, a diversified commercial real estate services firm serving as the holding company for five wholly owned operating subsidiaries: Norris, Beggs & Simpson Financial Services, Morrison Street Capital, Morrison Street Research, NBS Real Estate Consulting, and The REFF Group. Jan has been with NBS since 1981, and is directly responsible for the day to day operations of the NBS companies and supervises the administrative functions of the companies. She became the firm’s first female partner in 1993, CFO in 2005 and CEO in 2011. When the company reorganized in 2015, she subsequently negotiated the sale of their brokerage and property management divisions before stepping into her current position.

Jan was named to the City of Vancouver’s Downtown Redevelopment Authority Board in 2017. She is a past president (and first female president) of the local chapter of NAIOP and a member since 2002, as well as being a member of the Mortgage Bankers Association, the Building Owners & Managers Association, and the Commercial Association of Brokers. She serves on the PSU Center for Real Estate Advisory Board and is a current member of the International Women’s Forum, the Bizwomen Coalition, and the RACC Resource Council.

She is an advocate for the arts and arts in education both locally and nationally, including leadership roles in Young Audiences Arts for Learning. Jan served on the local chapter’s board of directors for 20 years, and on the national board since 2000, currently as Secretary. In 2018 she was the National Honoree at the Young Audiences Arts for Learning Gala in New York. Portland State University’s Center for Women’s Leadership honored her with their Lifetime Achievement Award in 2016 and the Real Estate Forum Magazine named her a 2014 Woman of Influence. Of her numerous other awards, a special treasure was the Portland Business Journal’s Orchid Award in 2008 for her business and civic contributions. 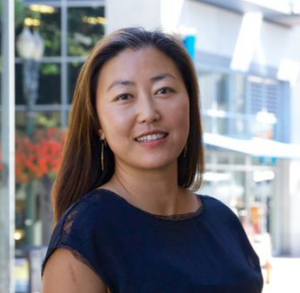 Su Embree is the President of DHM Research, a premier opinion research firm in Oregon with offices in Portland, Seattle and Washington, DC. Su’s interest in research began early in college where she learned the power of good data to improve outcomes. Today, she dedicates her time in highlighting the voice of our community to executive teams, elected officials, and boards of directors. Su believes strongly in board service in her community. She is a Trustee of the Oregon Community Foundation; President of the Entrepreneur’s Organization; Executive Committee member and Trustee Committee Chair of OMSI; board member of Healthy Democracy and member of Greater Portland 2020. She was awarded the Orchid Award by the Portland Business Journal for Achievements for Women of Influence. Su is a graduate of the University of Tennessee. 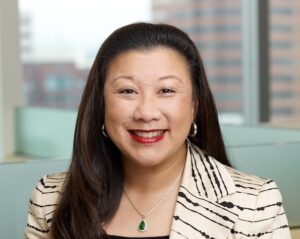 Kathleen is a Senior Wealth Advisor and shareholder at Buckingham Strategic Wealth an independent, fee-only wealth management company, and serves as a fiduciary in helping clients create solutions and discover the significance of their wealth. Her particular expertise is working through complex financial situations. Kathleen recently sold her company, Confluence Wealth Management to Buckingham Strategic Wealth where she served as CEO for the last ten years. She is atypical in leading a financial services company as a women of color and a women owned business, leading the company to a four-fold growth during her tenure.

Kathleen feels it is important to be involved in the community and presently serves as the immediate past chair of Randall Children Hospital, board of Trustees, Chair of the Friends of the Children Foundation- Portland, and serves on the boards of the Portland Business Alliance, Marylhurst College, and is a founding board member of the Friends of the Children SW WA. Professionally she has served on the CFP Board of Professional Review and mentors many women through the CFP Women’s Initiative (WIN), as lends her expertise to many investment committees such as Legacy Health Foundation, Multnomah Athletic Club and as an ex-officio member of the investment committee for the Oregon Historical Society. She was also recently selected as one of the Portland Business Journal’s Women of Influence recipients for her business and professional contributions. Kathleen attained her BS in Finance from Oregon State University and her MBA from Washington State University. 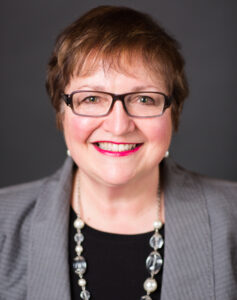 Debbie Kitchin is a Principal of InterWorks, L.L.C., a general contractor specializing in commercial tenant improvement and renovation and residential remodeling since 1994. InterWorks is an award-winning contractor with expertise in sustainable building practices. Prior to joining the family business in 1996, Debbie was a regional economist for 18 years, mostly at the Northwest Power Planning Council. Debbie serves as Past President of the Board of Directors of the Central Eastside Industrial Council and a member of the Board of Directors of Greater Portland Inc. She was appointed to the City of Portland Charter Review Commission in 2020. She is also a member of the 2021 Emerge Oregon cohort. She served as Chair and Member of the Board of Directors of the Energy Trust of Oregon (member for 16 years). She is Chair Emeritus of the Portland Business Alliance. Debbie was awarded the 2017 William S. Naito Outstanding Service Award and the 2015 DJC Women of Vision Award. Debbie has a B.A. in Economics from Reed College and the MBA from Portland State University. Debbie loves living in the beautiful Pacific Northwest and enjoys many outdoor activities including skiing, soccer, golf and hiking. 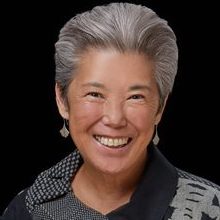 Nakashima is one of the original founders of the nonprofit, Partners in Diversity and Say Hey!, a quarterly community event held since 2003, to welcome professionals and leaders of color who relocate to pursue careers in Oregon and southwest Washington. She currently serves on the board of Mary’s Woods at Marylhurst and the American Leadership Forum of Oregon, and the International Women’s Forum of Oregon. Vicki also serves as a member of the Development and Marketing Committee for the Oregon Community Foundation. She has been an advocate for civil rights and racial justice in Oregon. Vicki is also proud of her long-time hobby of showing Arabian horses at the local, regional and national levels.

In recent years, Vicki has been helping to make the game of golf more welcoming and inclusive for women and people of color. She has volunteered with the City of Portland Golf Program, junior golf programs and the Oregon Golf Association. Vicki lives in Camas, WA and has a son and grandson living in Salem. 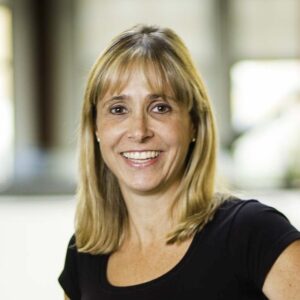 Sabrina Parsons is CEO of Palo Alto Software, developer of the best-selling business management software, LivePlan and email management product Outpost. Palo Alto Software, with headquarters in Eugene, Oregon, develops software and tools specifically targeted for entrepreneurs and small-business owners. Palo Alto Software employs over 70 employees and gives all employees paid maternity and paternity leave, supports a generous short-term disability policy, and focuses on employee benefits that honor and respect their employees’ whole lives. Sabrina assumed the CEO role in April 2007. She is a staunch supporter of entrepreneurs, and supports entrepreneurial organizations. She has recently been appointed by Governor Kate Brown and voted by the legislature to the State of Oregon’s Workforce and Talent Development, as well as Co-chairing the Oregon Growth Board, another Governor appointed and legislature voted-on position. She is also on the board of the Princeton Entrepreneurs’ Network and is on the Board of Directors for RAIN, the Willamette Valley Regional Accelerator Innovation Network. Sabrina believes in community involvement and is helping and volunteering in different organizations in Oregon to help further philanthropy, economic development and public education in the community. She is a graduate of Princeton University. 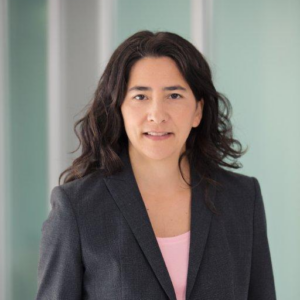 Jackie Seto is the Principal of Side People Consulting LLC providing leadership and business advising to non-profit and tech companies, with a strong focus on helping next generation women leaders. Prior to Side People, Jackie spent 22 years at Lam Research, a Semiconductor Capital Equipment Manufacturer where she led research, product development and marketing for multiple business units. In 2010, she founded the technical women’s group at Lam to help women successfully navigate their careers in traditionally male roles. Jackie is a Non-Executive Director for Ultra Clean Technology (UCTT) and serves on the Board of Directors for Prevent Child Abuse Oregon (PCAO) and Mastersranking.com and on the Board of Trustees for Oregon Museum of Science and Technology (OMSI). She is an Executive in Residence for the Technical Association of Oregon (TAO). She is also a volunteer at Cat Adoption Team (CAT) where she feeds kittens and cleans cages with her two teenage daughters. She holds a Bachelor of Engineering in Chemical Engineering from McGill University in Montreal, Quebec. 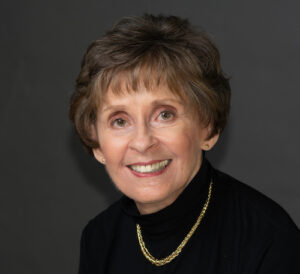 Following her teaching and research, Dr. Elisabeth Zinser devoted 32 years to university administration as dean, vice president for academic affairs, chancellor, and president. Her executive posts were with the Universities of Idaho, Kentucky, and Southern Oregon University. She holds the honor of Distinguished Fellow from the Association of American Colleges and Universities (chair for two years), then helped lead a centennial fund drive and an international collaboration in liberal education. Dr. Zinser’s international service included strategic planning with the Medical University of Southern Africa in the period following the fall of apartheid, as South Africa transformed higher education to empower the pre-apartheid universities. Elisabeth has been actively involved in community service throughout her life. For Oregon, she served on the boards of the Oregon State Bar Board of Governors (4 years), Oregon’s Sesquicentennial, Girl Scouts of Oregon and Southwest Washington, the Oregon Shakespeare Festival (8 years), and the Crater Lake National Trust. Elisabeth has been an active member of the International Women’s Forum since 2005 and has attended several international conferences. Her most recent local service has been two terms on the Ashland YMCA Board and President of the Rotary Club of Ashland. Currently, she is an officer on the Leadership Council for the Osher Livelong Learning Institute of Southern Oregon University. 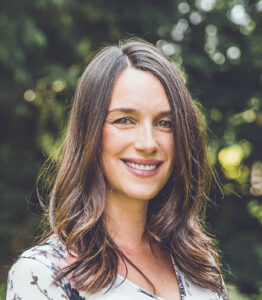 Jessica Zubach serves as Operations Manager for IWF Oregon. Under the direction and guidance of the President and Board of Directors, she is responsible for managing day-to-day forum operations, supporting forum members and facilitating their participation in forum activities. Prior to joining IWF Oregon, Jessica led principal donor stewardship programs for Oregon Health & Science University and Doernbecher Children’s Hospital Foundations and produced award-winning ad campaigns at Wieden+Kennedy for Fortune 100 companies including Nike and Procter & Gamble. Jessica attained her Bachelor of Science in Organizational Communication and Public Relations from the University of Portland. She currently lives in Anchorage, Alaska with her husband and two young children.